A $2000 dollar drop at the beginning of the month significantly altered the fundamentals for Bitcoin. After breathing down the neck of a probable 2019-high ($13,8oo), BTC paid another visit to the $10,000-level. As a result of Bitcoin’s fall on the charts, positive market sentiment was disrupted, following which, certain changes were triggered over the next 2 weeks. 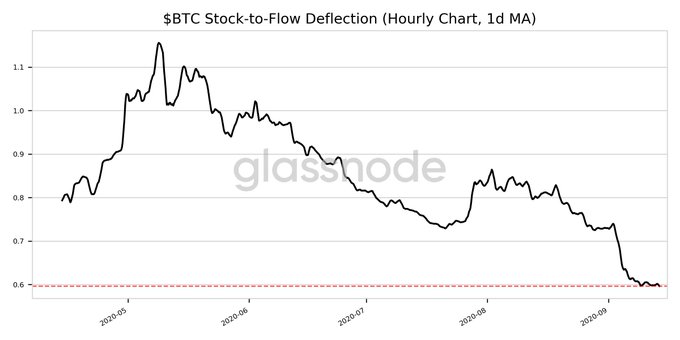 Now, according to a recent Glassnode update, Bitcoin’s Stock to Flow Deflection has registered a 5-month low of 0.596. The S2F deflection indicates the ratio between the present Bitcoin price and the S2F model. If the value is under 1 (as it is currently) then, according to Stock-to-Flow, it is currently undervalued.

However, as we approach the last quarter of the year, the deviation of Bitcoin from the S2F might significantly increase.

As observed in the attached chart, Bitcoin has been overvalued and above the S2F ratio for only a brief period since 2017. If current levels are expected to be followed, Bitcoin needs to be valued at $17,060 by 1 October. That is a huge ask, one that would require Bitcoin to climb steeply by almost $7000 in just two weeks.

However, that isn’t the main argument. The fact of the matter is that Bitcoin continues to lag behind the model, which is why the curve to meet the next targets are getting steeper and steeper by the week.

Keeping that in mind, it is also important to note that Bitcoin’s halving cycle is yet to impact its price in a parabolic manner, as it has in the past, which is why the probability of meeting those targets is still in sight.

With the cryptocurrency’s present market price undervalued, under a rough estimation, the minimum value that Bitcoin needs to touch is $18,000 by the end of December 2020 for the S2F deflection value to be above 0.5. The actual desired value is $30,833 on 1 January, hence, any price point for Bitcoin under $18,000 will only invalidate the rationality of the Stock-to-Flow model.

The post Bitcoin: For S2F to be valid in 2021, this is BTC’s price target for December appeared first on AMBCrypto.

Can a liquidity marketplace advance the crypto industry?