Bitcoin’s market over the past 24-hours has noted a little bit of calm. While avoiding any further collapse, Bitcoin was able to consolidate above its immediate support, despite the fact that the bearish pressure still loomed large. However, during this time of distress, a positive development was taking place with respect to a particular metric. 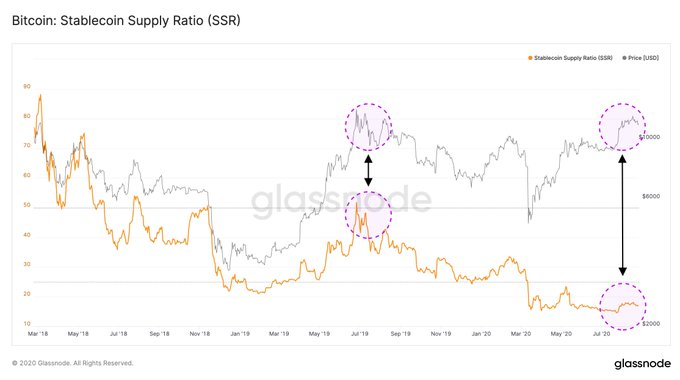 According to Glassnode’s latest data, the Stablecoin Supply Ratio (SSR) for Bitcoin indicated that there was significant buying power for Tether over BTC. In fact, the SS ratio was 3 times stronger than in June 2019, a period that coincided with Bitcoin’s bullish rally last year.

Such a scenario pointed to the likelihood of upward movement for Bitcoin as the king coin struggled to break the shackles off the bearish grip on the market.

How did the SS ratio become so dominant?

The answer is pretty straightforward – Stablecoin Supply grew at an astronomical rate. On 28 August 2019, the active Tether supply in the ecosystem was 4 billion. The supply, at the time of writing, was a whopping $13 billion, with the same registering a whopping 210% increase in a span of a year.

The rise of USDT and stablecoins, in general, was not expected by anyone in 2020, especially since Tether is now the third-largest cryptocurrency in the market. In the meantime, it was reported that Tether‘s average adjusted value transfer was 20 percent more than Bitcoin‘s, at the moment. However, that wasn’t all and the impact of Tether on Bitcoin investors might have slowly changed the entire paradigm of trading.

Now, the important thing to understand is that with an increasing supply for Tether, the liquidity attached to stablecoins has also been extremely attractive. Before, traders would need to hedge their BTC capital with other altcoins having better liquidity, but USDT is now changing the game. Rather than holding other alts, traders are happy to trigger higher inflows into exchanges in the form of USDT because that is the closest asset mirroring fiat characteristics.

In fact, a recent Chainalysis report had suggested that Crypto-to-Fiat exchanges received $1.66 billion in Bitcoin from crypto-to-crypto exchanges, underlying the shift in trading with USDT.

The market is such that now, traders are almost patient by holding high volumes of USDT on exchanges, scalping through the market for profitable Bitcoin positions. Keeping high volumes in USDT is also promoting Bitcoin’s demand, creating a win-win situation. Hence, Tether’s impact on the larger Bitcoin ecosystem is only going to evolve from here on.

The post How is Tether allowing Bitcoin traders to be more ‘patient?’ appeared first on AMBCrypto.

$500M in crypto futures liquidated as Bitcoin dips below $34K: What happens next?

Bitcoin’s shortage on exchanges is a good thing