A few weeks back, Gold‘s 1-month correlation with Bitcoin reached an all-time high of 68.7%. That was a strong period for both these assets, especially since both were noting significant hikes in valuation, at the time.

Now, although we had previously reported that Bitcoin and Gold’s higher correlation did not imply a parallel market, it seems like a falling correlation with Gold has blown up in Bitcoin’s face. 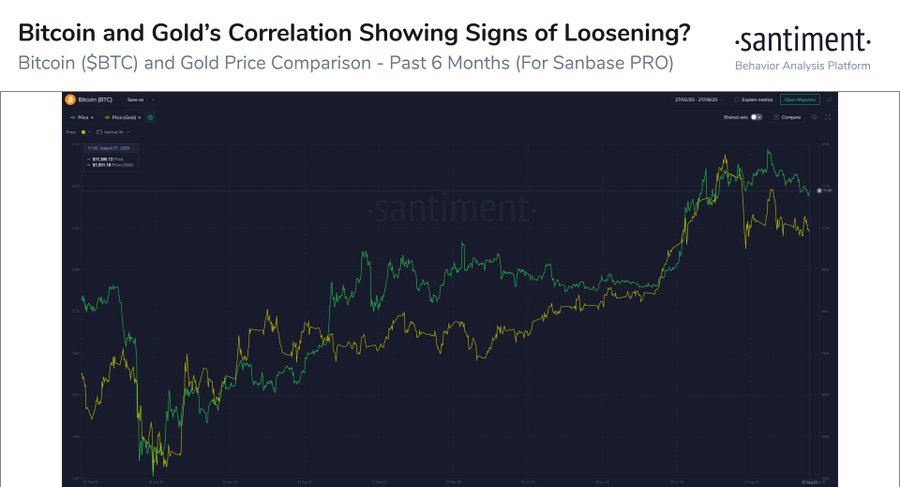 According to Santiment’s recent tweet, Bitcoin and Gold’s spot prices seem to be registering a drop in correlation. With Bitcoin dropping in value and the potential of a bearish breakout in the market, we tracked past instances when Bitcoin correlation with Gold had fallen. 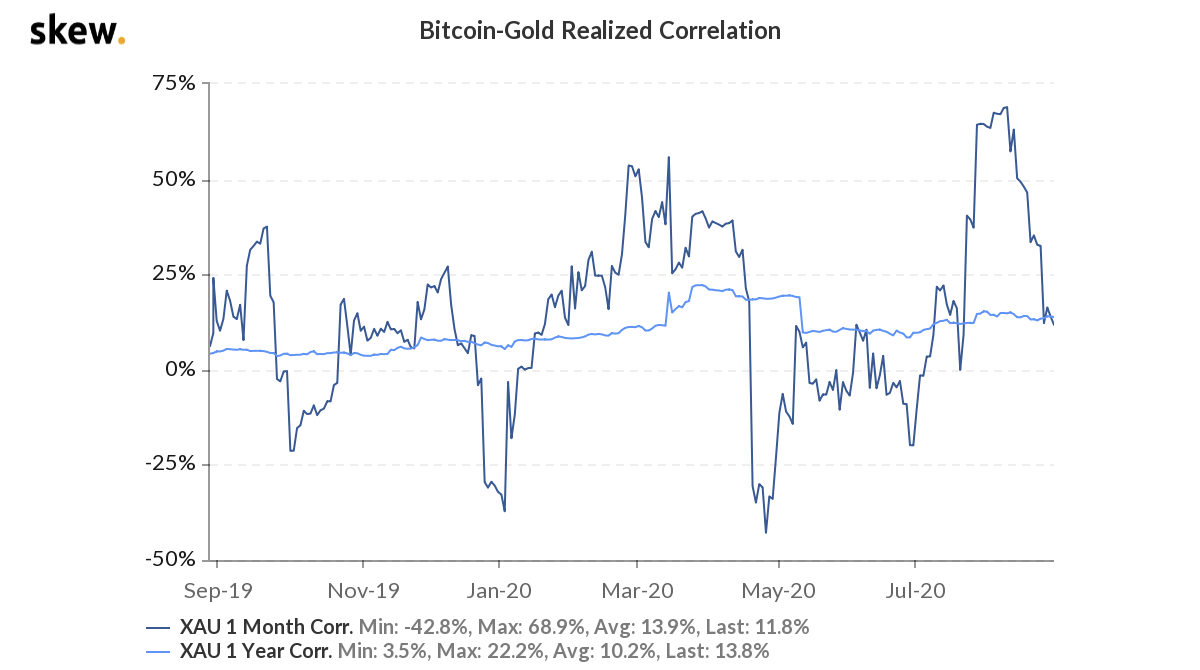 At the time of writing, Bitcoin’s correlation with Gold was a meager 11.8 percent and its all-time high of 68.7% seemed like a distant memory. Further, when observing the above chart, it can be seen that whenever Bitcoin has decoupled from Gold, its prices have consistently gone down.

For example, when the correlation started increasing in January 2020, the valuation of Bitcoin had followed suit and sustained a bullish rally. A similar scenario played out recently towards the end of July when the prices started to rise after BTC-Gold clocked in an all-time-high cohesion.

There is no way Gold dictates Bitcoin’s value, for your information. However, past references in 2020 have indicated that it is better for Bitcoin to be aligned with Gold, rather than undergoing extensive uncorrelation from the yellow metal.

Does it mean Bitcoin’s bearish rally is confirmed?

No, at least not now. Bitcoin’s present consolidation above the 4-hour support range of $11,400-$11,200 seemed stable, at press time, but these are critical times. In order to sustain a little bit of recovery, an improvement in Bitcoin and Gold’s correlation would not hurt BTC’s own credentials.

If Gold-Bitcoin’s correlation were to increase from now on, there is a high possibility that Gold’s indirect impact on Bitcoin will be fairly evident when Bitcoin reaches another all-time high in terms of value. For Bitcoin right now, riding out the market with Gold is far more important than finding its own way out.

The post For Bitcoin, Gold could emerge as an unlikely saviour appeared first on AMBCrypto.

Overexposed: DeFi indexes aren’t as diversified as you think

3 reasons Bitcoin tumbled below $30,000 in a surprise overnight correction